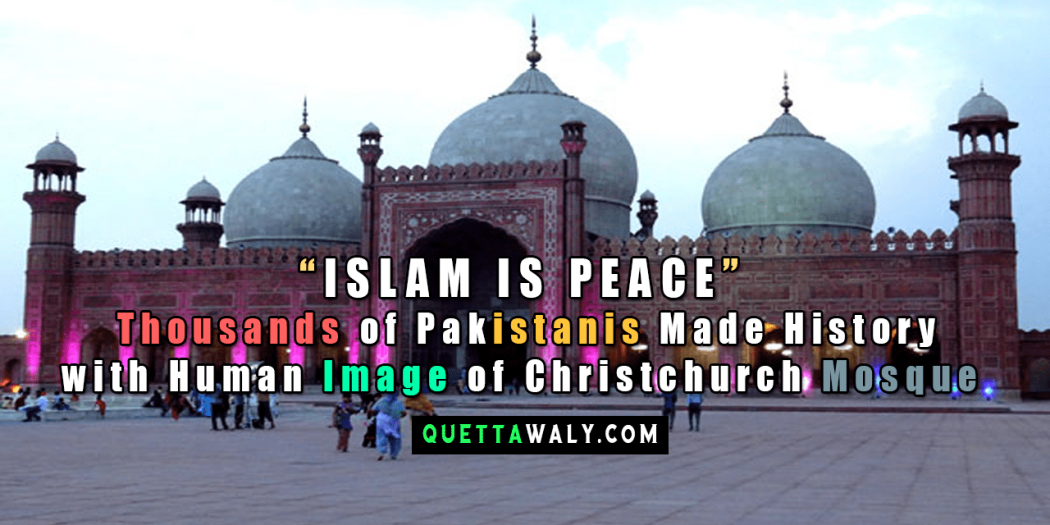 “ISLAM IS PEACE” : Thousands of Pakistanis Made History with Human Image of Christchurch Mosque

A proud moment, around thousands of Pakistanis were gathered in white cloths in a Punjab’s Stadium, A central city of Jhang to create a human image of Christchurch’s AI Noor mosque, where a terrorist martyred 50 people last month.

Some of the drone images can clearly show the worshippers standing in formation, donned in pearl white traditional shalwar kameez dress with matching prayer caps on an emerald green public field – and second group on the side lines – formed the sentence ‘Islam is Peace.’

A huge flag of New Zealand and including Pakistan, which is displayed along with a huge banner that read: “Solidarity with the Martyrs of Christchurch from Pakistan,” This was a unique way of showing a solidarity to the entire world.

Take a Quick Look at the Video, Which is Shared by the Institute:

This event took place on Friday and it was organized by the Muslim Institute, a Non-Government Organization, which was aimed to promoting peace and stability in the Muslim world.

This event live on Facebook from Muslim Institute’s Official Page and has so far gathered a lot of views.

It’s also worth noting that nine of these Christchurch victims were Pakistanis.

Previous Unbelievable! This Is How Gwadar, Balochistan Could Look Like In 20 Years #20YearsChallenge
Next Study Shows Pakistan Can Fill Two Large Dams but Annually Fresh Water Wasted