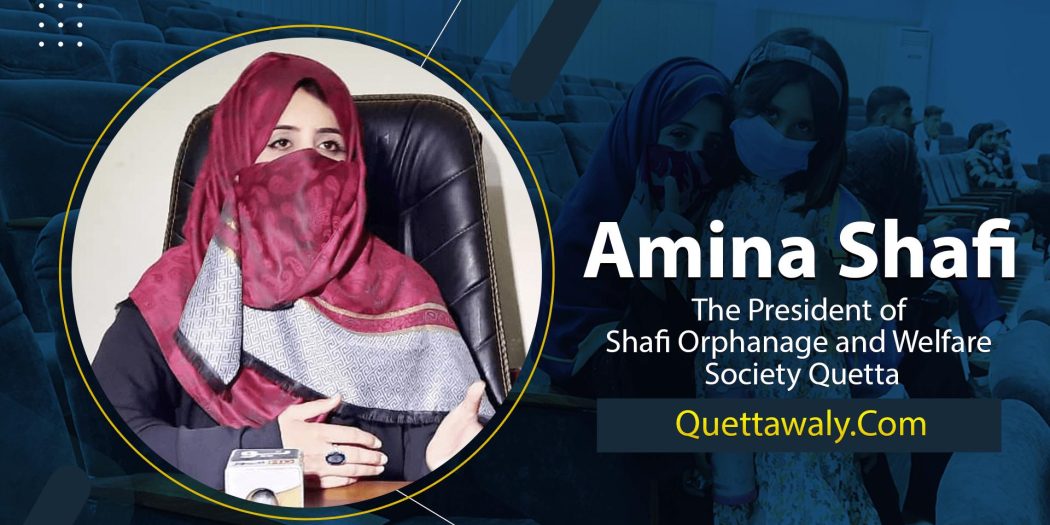 Life is precious to every person as it’s a beautiful gift from Allah Almighty for a human. So, therefore, every person tries to spend it with whatever possibilities that could help them enjoy it and make the best out of it. So whether it would be the friends or family members, everyone tries to make more fun.

Well, it’s a kind of normal life for anyone who used to spend it on their terms. However, the ones who devote themselves to others or their purpose is to take responsibility for the less-privileged peoples are the ones that are not so common these days.

Such a kind of mindset and life of spending is very rare. Because nobody would that easily sacrifice their own life’s for others and makes it a beautiful one for others. Allah specifically chooses such types of people, and those who early got into such activities are blessed with the most in this life and hereafter.

One big example is Amina Shafi, the Founder and president of Shafi Orphanage and welfare Society Quetta. Currently, she is managing more than 100 orphan children. She considers every one of them as her children, and she also stated that her whole life is devoted to taking care of the orphanage children.

The amazing thing about Shafi Orphanage and Welfare society is that every facility that has been provided to the children is done by its expenses. Yes, Amina Shafi is the one who is taking care of everything with her own pocket money. She has never taken the help of any NGO or government officials to come forward and pay their part in changing the lives of these more than 100 orphanage children.

Amina Shafi is paying for the education costs of these children who are studying in different private schools. However, she has told in the interview that all of them are progressing positively and are getting good grades in the schools.

The driving force that is still in her heart to manage this beautiful work is by looking towards the achievements of every child in their curriculum. Therefore, she never loses hope in doing what she has started to do.

Amina Shafi Told in an interview that whatever she eats in the home or whatever a good family person eats to attain a proper appetite in life would give to these children. This is because when you get good protein and nutrients, your mind will work better, and it helps you to do good in daily life routines. That’s the reason she has made a proper weekly menu where the children get to enjoy delicious meals along with their educational responsibilities.

She has further said that many of the orphanage families get monthly rations. So, she is also helping the low-income family children who can’t afford to study or eat properly by providing them with necessities.

How Did She Start the Shafi Orphanage?

Amina Shafi started helping the poor children by providing them free coaching when she was in 11ths class. Therefore, we would say that Amina has got this feeling from a very early age. If we would say that it was her childhood vision, so there is nothing wrong with it.

The idea of getting all these things to a proper building and then managing multiple things is when she saw a drama on PTV where the characters were Couples and had no children. So, they went to Kashmir and adopted children from the local Shelter Home. It was something that made her think to do the same as she was pretty much passionate about. So, in simple words, that drama built the same emotions in her heart, allowing her to do the same.

From there, the emotions are not built-in herself as a strong passion, which she doesn’t want to lose for this temporary world. So, due to the same reasons, she has registered the Shafi Orphanage and Welfare society Quetta.

Does Any NGO or Government officials Support her for this Cause?

As said earlier, Amna Shafi is not taking any money from the NGOs or government officials to run this Orphanage. There are several reasons behind it. First, she is doing whatever the best she can from her own hard-earned money. She has never approached any of the orphanage paying organizations ever in her entire life.

Right now, the building that she is using is quite congested as per her thinking. So, therefore, she plans to donate 5 acres of land that is her property to build a school and other facilities for the children.

She plans to complete the project as soon as possible so that the children will shift with her over there. It’s a difficult task to build such a type of organization where handles everything at your cost. The situation of Pakistan is currently not that stable as everything is getting expensive each day. Despite that, she is still trying to do whatever the best she is capable of.

Does Amna Shafi Take any Donations in the Future?

Looking after the current situation, Amna Shafi has said that every month is becoming difficult for her to manage the whole thing. However, she is not losing hope and trying to do whatever would be best for the orphanage children.

She even conveyed a message to those people like her who have a passion for helping the needy families and children of the Society by donating whatever is possible. Right now, she has 100 children, and later, she wants to help thousands of other children who need her support and care. For that, anyone in the Society who can afford the expenditure must contact her in this significant cause.

Her vision is to help the needy and let them stand on their own feet by becoming the elites. If one of the children got onto that point, they would become the helping hands for others. So, the chain will never break, and thousands of families would quickly get benefits out of it.

Reading Time: < 1 minute Ali was born on 2004 in Quetta, He has cleared his matriculation from Elegance School …