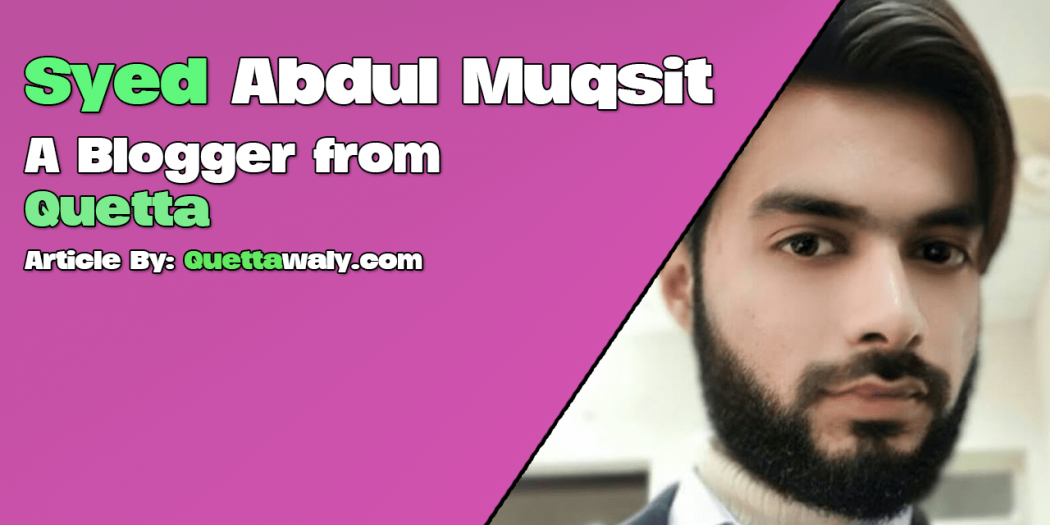 Blogging is already a growing field in Pakistan and peoples are earning a handsome amount of money from blogging if you are working hard. I think earning from blogging is way more than you can earn from a government job or a private. Blogging is like a business in a digital world where you provide the best solution to a user and convert the user into a customer. However, in this growing industry, you can see a lot of examples from all around Pakistan but if I tell you there is a guy doing blogging and earning a lot from his home from Quetta.

Syed Abdul Muqsit is living in the capital of Balochistan “Quetta”. He Is a student of Computer engineering at Buitems University Quetta.

Muqsit started his online career in 2014 on a free blogging website also known as BlogSpot. After working for some time on BlogSpot he realized to start his own website from scratch without any investment he still earned a good amount from that website but due to less knowledge about the payment withdraw method from PayPal. He started to work on another website of News category with a partner.

In the interview, Muqsit mentions that the partnership earning did not satisfy his heart due to the share of his partner so he wanted to start his own business but without any investment, it gets very tough and impossible for him to start

In 2015, muqsit started the services of content writing and worked for a Pakistani client. He used to write almost 300 articles per month for 10,000 rupees.

Later he realized that the earning ratio of content writing is much higher than in Asia. So, he started to work for foreigners and earned way better than from Asian clients. There was also a time when he easily earns 1000 rupees for a single article.

In 2016, one of his friends tells him about the course of the popular personality Muhammad Aamir Iqbal about online earning and blogging. He attended his course and learned a lot of new things from him.

With a new knowledge of blogging and online earning Muqsit started his own work and established a lot of his own websites. He left all the other works and only focused on blogging and in 2017 and now in 2018 flourished a lot.

He is now teaching more than 1000 students about blogging and online earning.

Last year he attended a meetup as well where different cities of freelancer and blogger were also there and he was the only one representing Baluchistan.

He is the only SEO expert from Baluchistan and we wish him best of luck for a successful future and always pray for his health.