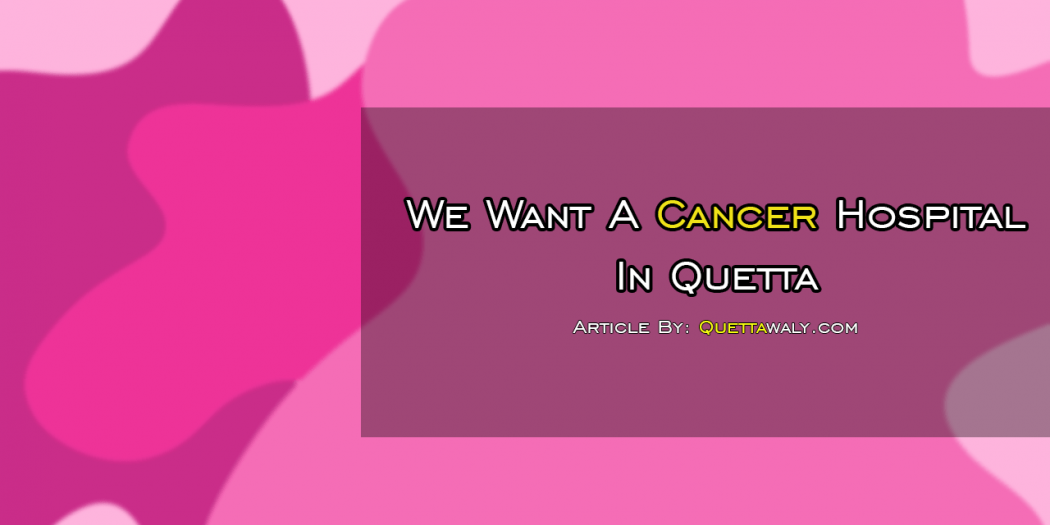 We Want A Cancer Hospital In Quetta

Cancer is one of the growing diseases in Pakistan that is continuously destroying human life. The rate of cancer is increasing daily and the way to stop the disease is still unrecognizable.

If talking about the categories of cancer so it is uncountable as it is increasing daily. There are cancer hospitals in Pakistan working on a daily basis to cure the patient. But the continuous growth of this disease is making the hospitals tiny in front of them. While Balochistan is still hoping for the cancer hospital.

IF we talk about Baluchistan so as there Is no hope of employment or good education from the government yet. The hope of health is somehow sad the population of Baluchistan as there is no good hospital for Cancer established in Baluchistan.

Cancer is growing so fast in Baluchistan and the increasing ratio is in rural areas of Baluchistan. The rural area’s population are not so wealthy and can not afford the expense of traveling or accommodation on cities like Lahore, Peshawar, Karachi where a proper hospital is available for cancer patients.

Imran khan promise for a cancer hospital in Quetta

Imran Khan promised about the cancer hospital in Quetta but still, the work has not started. The establishment of a cancer hospital is very important for the patients so that they can afford the expenses of accommodation and travel inside Baluchistan.

Not only the rural areas but there are a vast majority of urban areas of Balochistan who can not afford the expenses. 100s of humans are daily dying due to this disease just because of the expenses they can not afford.

The platform raised voices for Cancer Hospital in Balochistan

People with a different platform like Quettaonline.com and JahaSoft raised the voices against the less importance and attention to the Baluchistan province.

A Baloch brother from Balochistan volunteering in Fixit was also raised voiced against the less importance by the government for Balochistan and addresses the education and other problems as well which need to be rectified as soon as possible.