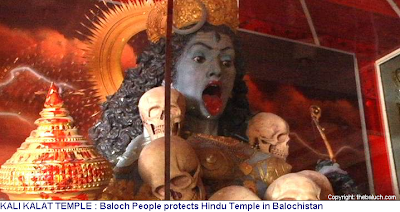 Kali Temple/Mandir is a Hindu temple situated in Kalat, Balochistan. The traveling distance of Kalat is almost 130 kilometers from Quetta Balochistan and it takes almost 2 hours to reach Kalat.

If we talk about the place Kalat so there are areas in Balochistan consider as Baloch and Pashtoon belt. Kalat comes under Baloch Belt.

If talking about the weather so Kalat is the coldest place of balochistan in winters.

The place no doubt had a lot of historical places and one of them is the 1500 years old Kali Mandir in shahi Bazaar Kalat.

The second biggest Kali Mata Statue of Asia is placed in the mandir and because of that not only the Hindus of Pakistan but the Hindus of India also come here to visit the mandir.

It is also the belief of the Hindu religion that kali Mata spends most of the life in Kalaat, Balochistan.

The existence of the mandir in the city like Kalaat is the positive thing about Pakistan that they respect and care the non-muslims religion too.