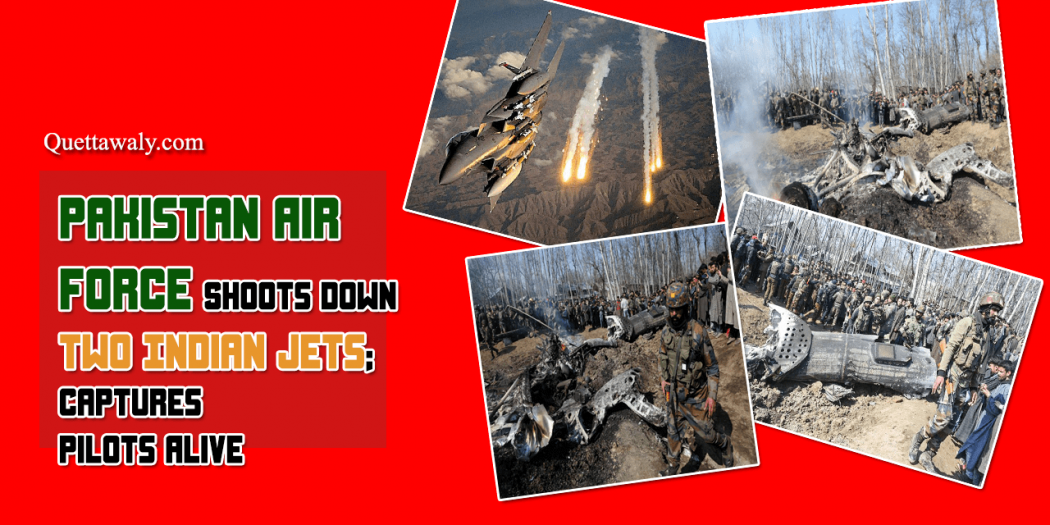 The Two Indian Air Force (IAF) Aircraft have been successfully been shot down by Pakistan Air Force.

This war happened when the Indian jets have crossed the Line of Control and entered Pakistan airspace.

One of their jets have fallen down in Azad and Jammu Kashmir area while the other fallen inside Occupied Kashmir.

The proud Pakistan Air Force has successfully managed to capture one of their pilots while two are in the area.

According to Sources; Indians claim of shooting down an F-16 are completely False Story. And do not ever believe Indian Media, These are the Worst and False Media in the entire Globe.

UPDATE: According to DG ISPR, Pakistan has selected six targets as their response for India’s violation of Pakistani Airspace yesterday. The targets weren’t military and were chosen to ensure there would be no loss of life or further escalation. This morning, all six were successfully targeted.

“Such a response befits a mature nation and India left us no choice but to show our mettle. At the same time, the selection of our targets shows we are a responsible nation.”

DG ISPR has further added that one of Indian pilot was captured and another injured pilot iis now in the CMH hospital.

He has also added that the Indian media false news about F-16 being shot, mentioned that no F-16 were involved in the entire operation.

“Both countries have the capability & capacity but war means failure of policy. We don’t want to escalate.“

“We invite India to have a discussion on peace so this matter can be resolved.”

In response to PAF strikes this morning as released by MoFA, IAF crossed LOC. PAF shot down two Indian aircrafts inside Pakistani airspace. One of the aircraft fell inside AJ&K while other fell inside IOK. One Indian pilot arrested by troops on ground while two in the area.

The Foreign Office of Pakistan has also successfully released a Statement:

#Pakistanstrikesback #PAF undertook strikes across LoC from Pakistani airspace. Sole purpose of this action was to demonstrate our right, will and capability for self defence. We do not wish to escalate but are fully prepared if forced into that paradigm#PakistanZindabad

Below is one of the video shared by the locals, a video of the shot down aircraft.

SAMAA TV has also released an exclusive Footage of Indian Jet going down. Watch Below:

It’s a developing story, we will be updating it accordingly.